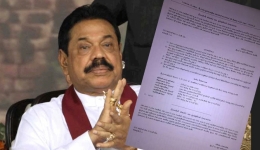 Former president Mahinda Rajapaksa vowed to sue the central bank and the finance ministry as a gazette emerged showing he created a 10 billion rupee bond whose sale has become the subject of several investigations.

Addressing reporters at a temple ceremony in Horana, the former leader said his name had been used to carry out a major fraud and he intends to take legal action against the finance minister and the central bank.

He was asked about a gazette of January 1, 2015 creating debt, including a 30-year bond on March 1, 2015 at a coupon rate of 12.5 percent under his signature as the finance minister just a week before he lost the presidential vote.

The gazette, which had not been sighted publicly by any of the investigators previously, came up Thursday during the commission of inquiry ordered by President Maithripala Sirisena.

Since then, the commission has asked for a clarification from the government printer on the actual date of publication of the impugned gazette.

It is unclear if such gazettes are published routinely setting out the government’s debt issue for the year, but has added a new dimension to the bond controversy.

“I am not the finance minister after Jan 8 (2015). Those who were in that position at the time have carried out a big fraud using my name,” the former president said. “My intention is to take legal action against them.”

The March 1, 2015, bond led to the removal of then governor Arjuna Mahendran who was accused of insider dealing by passing on sensitive information to his primary dealer son-in-law Arjuna Aloysius of Perpetual Treasuries.

The thrust of the allegation against Mahendran was that he ordered the Public Debt Department of the Central Bank to issue bonds up to 10 billion rupees after advertising a sale of just one billion.

It was assumed that unlike other primary dealers, Perpetual Treasuries had inside information that the Central Bank was going to accept bids up to 10 billion rupees, would quote higher interest rates and make a killing.

Evidence at the Presidential Commission on Thursday suggested that the government’s intention to issue over 10 billion rupees in March was known at the start of the year.

The gazette created up to 1,780 billion rupees of bonds of various maturities including 10 billion 30-year bonds to be sold via auctions as ‘notified by the Registrar of Public Debt through newspapers’.

The bond carried an interest rate or coupon of 12.50 percent, but each could be sold at a ‘discount/par/premium’ (to yield a higher, the same or lower interest rate) at an auction.

The average interest rate on the 30-year bond turned out to be lower at 11.73 percent compared to the 12.5 percent coupon rate announced by President Rajapaksa as the then finance minister.

The Rajapaksa faction of the Sri Lanka Freedom Party as well as the JVP alleged that Perpetual Treasuries benefited from insider information and earned billions of rupees.

Independent observers who have closely followed the controversy note that there should be more focus on the role of the Bank of Ceylon which financed Perpetual Treasuries to buy a large quantity of the 30-year bond.

The first investigation in April 2015 by a panel of United National Party (UNP) lawyers noted that Arjuna Mahendran had no direct role in deciding to accept bids, but called for a forensic audit of the Bank of Ceylon’s dealing room.

The lawyers committee noted serious lapses on the part of the Bank of Ceylon through whom Perpetual Treasuries had routed an unusually large amount of bids for the 30-year bond.

The Committee observed that the bidding pattern of Perpetual Treasuries was unusual and warranted further investigations.

It also noted that the Bank of Ceylon should seek explanations from its chief dealer and others on ad-hoc decisions risking a large amount of BOC funds.

SLFPers keen on amendments not new constitution: Dilan
Embassies of the countries which protect Sri Lankan government will be besieged by the demonstrators -Ananthi Sasitharan- -Reporter for Global Tamil News-
Comment