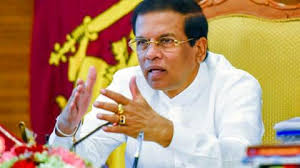 Sri Lankan President Maithripala Sirisena says a better society with Buddhist environment would be built while protecting the place of other religions.

He was speaking at the religious ceremony to offer the new Sanghawasa (monks’ accommodation) built in the Veluvana Vivekarama Temple in Laksha Uyana, Polonnaruwa, to the monks on Thursday (22).

The President stated that the solutions for all problems in society today can be found in religious philosophies. He pointed out the importance to make the young generation closer to the religious places in the task to build a better country.

President Sirisena, discussing about the development work of the Thivanka Pilima Geya and Demala Maha Seya stated that he had directed the President of the Central Environmental Authority to preserve their historic heritages during the development.

A na sapling was planted in the premises of the temple to mark the President’s visit. The President made a financial donation to Mr. Herath Banda who is suffering from kidney disease, to be used for building a house for him.

Chief Incumbent of the temple Ven. Mapakadaveva Rathanalankara Thero, Chief Minister of North-Central Province Peshala Jayarathne and the Provincial Minister Sampath Sri Nilantha were among those participated in this occasion.