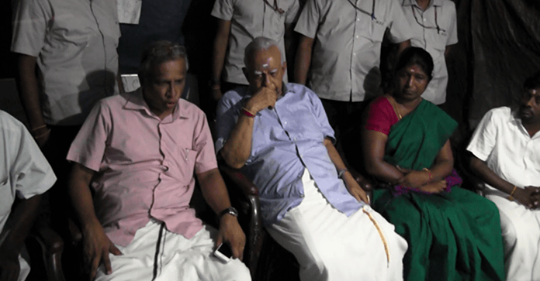 We will make a decision swiftly with regard to the release of lands at Keppapulavu, the Opposition Leader of Sri Lanka R.Sampanthan stated when he visited Keppapulavu yesterday.

The attempts of ITAK on releasing the lands in Keppapulavu have long been continuing. 136 acres of lands have been released recently. Some other lands have been released even before that. According to the people, 73 acres of lands are yet to be released. We have been making efforts in releasing the lands. I have met with the president last Thursday and gave him a letter with regard to it. I spoke to the president with regard to it. We will soon make a decision in this regard”, R.Sampanthan told Medias.

Central committee meeting of the ITAK held yesterday at Mullaitivu. Prominent figures including the Opposition Leader of Sri Lankanka R.Sampanthan participated in this meeting.

Opposition leader R.Sampanthan, spokesperson of the TNA M.A.Sumanthiran, parliamentarian Shanthi Sriskandarajah and others went to Vatrapalai Amman temple to worship after this meeting and met with the people who have been protesting at Kepapulavu to discuss.

Team headed by R.Sampanthan discussed with people about the progressive actions that they took with regard to this. He added that he met with the President with regard to the release of lands in Keppapulavu. President told that he and the military commander would be invited soon to presidential office to make a final decision in this regard. It would take place within 10 days to 2 weeks.

Sri Lanka wants to elevate relationship with India to higher level
Does foremost place given to Buddhism in constitution enable Government to set up Special Courts to “hear” cases against Buddhist Monks accused of breaking the law?
Comment