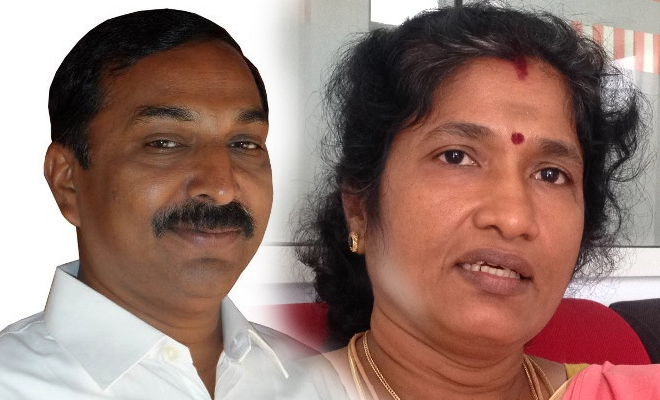 Chief Minister met yesterday at his residence from 6 pm to 8 pm all the 14 councilors who supported him during his ‘no confidence crisis,’ before making the announcement about appointing the new ministers.

It is regrettably noted that chief minister Wigneswaran has failed as a leader to have all the 30 councilors of the ruling party and thus exposed his glaring lapse as a leader.

However, he said that those two councilors were being appointed temporarily for a period of three months, until such time he sort out the political problems that have arisen due to the inquiries on the board of ministers and of their removals.

When asked what he meant by the appointment as, “temporary for a period of three months?,” he clarified that the two ministers though would take up appointment as full-fledged ministers, but my understanding with them was that their appointment was on a “temporary basis.”

It is said that Wigneswaran with the view to continue his spat with the leaders of the Ilankai Thamilarasu Kadchi, especially with the Party’s spokesperson M.A.Sumanthian MP, he has ignored the recommendation made by the party to appoint Emanuel Arnold, as the minister of education, instead he has appointed Arumugam Kandiah Sarvswaran as the education minister.

The Chief Minister has come forward to appoint two most controversial councilors, who were identified with Tamil militant groups.

Sarveswaran is the brother of Eelam People’s Revolutionary Liberation Front leader Suresh Premachandran. He has been appointed to take over the portfolio held by the former minister Thambyrajah Gurukularajah, minister of education, cultural affairs, sports and youth affairs, who recently tendered his resignation to the chief minister.

In the meantime, though Ponnuthurai Ayngaranesan, minister of agriculture and agrarian services, animal husbandry, irrigation, water supply, food supply and distribution, environment and co-operative development, who has tendered his resignation, hence the ministerial slot became vacant and Ananthi Sasiharan has been appointed to fill in the vacancy occurred, but not as minister of agriculture, but to be a minister mainly to be in charge of women affairs, chief minister said.

When media persons asked, who will take charge of agriculture and other conncted ministerial subjects, Wigneswaran said “adiyane.” (A term of humility, meaning, ‘your slave.’ )

It is learnt that, these two ministers would be sworn in today at 10 AM by the Northern Province Governor Reginald Cooray at the Governors Secretariat.

In another development, M.K.Sivajilingham another councilor, in a media interview said that, he was offered a ministerial slot by the chief minister, but he has declined to take it up.

Earlier, Ilankai Tamil Arasu Kadchi recommended one of its Councilor Emanuel Arnold, a loyal confidante of Sumanthiran M.P., to fill the vacant position of minister of education – claimed to be the quota belongs to the party.

However, to continue with his spat with Sumanthiran and the party, Wigneswaran simply ignored the party’s recommendation and appointed Ananthi Sasitharan, who has been subjected to a party disciplinary inquiry and could be removed from the party, at any given time.

By ignoring Party’s recommendation,Chief Minister Wigneswaran continues with the spat with Sumanthiran and ITAK refuted openly ITAK’s claim that he was its candidate in the 2013 Provincial Council elections and that he should bow to its will.

Wigneswaran has made it clear that he was a consensus candidate of the Tamil National Alliance, an amalgam of parties including the ITAK and therefore, no single party can claim exclusive rights over him.

In the meantime, ITAK has demanded a probe into complaints about the working of departments directly under the chief minister Wigneswaran.

Furthermore, the ITAK pointed out that the Chief Minister’s way of probing was illegal and unconstitutional, because probes against any member of the Board of Ministers can be conducted only by a Select Committee of the House (NPC) and not by a body of outsiders.

As per parliamentary procedure, extended to the provincial councils, it is the privilege of the House to control the conduct of its members, and ministers are members of the house. Any interference by outsiders would be “breach of privilege,” Sumanthiran pointed out.

“Chief Minister Wigneswaran had told Sampanthan that he “would hold a fresh legal inquiry,” against the two ministers B.Deniswaran and P.Sathiyalingam. It is the ITAK’s contention that the only legal way to conduct an inquiry is to have it done by a Select Committee of the NPC,” Sumanthiran added.

Therefore, the ITAK says, there ought to be a fresh probe into charges against the four ministers by a Select Committee of the NPC. And to be fair and evenhanded, the terms of reference should include charges against the working of departments handled by the chief minister himself.

The ITAK also pointed out that the chief minister was partisan in handling the corruption cases, in as much as he had ordered a fresh probe against two ministers when these two had been found “not guilty” by a commission he had himself set up.

In another relevant development, Ariyakutty Paramsothy, a councilor of the ruling TNA, has forwarded a draft of his resolution to the provincial Council Assembly, calling for the appointment of a select committee of the provincial council, to investigate into the charges of corruptions and fraud against all ministers, ministries, departments and other relevant organizations – including that of the chief minister and the other four ministers of the provincial council and submit report to the assembly.

‘Asian Tribune’, learns that the words “corruption and fraud” have been removed from the copies of the the draft resolution, sent to the councilors.