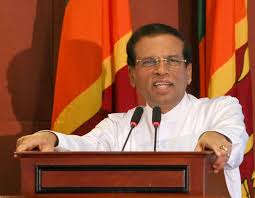 President Maithripala Sirisena is reported to have told the Tamil National Alliance (TNA) that he would request Prime Minister Ranil Wickremesinghe to initiate a dialogue with former president Mahinda Rajapaksa on formulating the new constitution.

The 16 TNA MPs met President Sirisena on Thursday, and discussed their concerns. The TNA had asked about the progress being made on constitutional reforms. One of the MPs who attended the meeting said it was at this point that the President responded saying he would request the Prime Minister to talk to Mr. Rajapaksa to bring about a common approach to the matter at hand.

The joint opposition led Mr. Rajapaksa is opposed to any change to the unitary nature of the country and the foremost place accorded to Buddhism.

The TNA complained about racial discrimination by some ministers in the allocation of jobs in the government sector in the North and East.

The President is reported to have said that even the Sinhalese are sidelined in certain instances at the hands of these ministers.