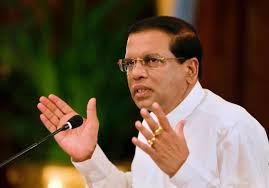 Sri Lanka’s President Friday dropped a bombshell claiming that Tamil Tigers planned a flight from neighbouring Tamil Nadu to destroy targets in Colombo as the separatist war drew to an end.

Maithripala Sirisena told Sri Lankan expatriates in New York that he was the senior most politician in the country in May 2009 directing security forces in the absence of all other leaders.

He said it was a well-guarded secret that the then president Mahinda Rajapaksa and his prime minister Ratnasiri Wickremanayake were out of the country fearing a Tiger air raid.

Then secretary to the ministry of defence Gotabhaya Rajapaksa and army commander Sarath Fonseka were also away from the island as they feared Tiger air attacks, Sirisena said.

“The Tigers were going to operate an aircraft from Chennai or some other jungle in Tamil Nadu to bomb and destroy targets in Colombo,” Sirisena said. “I was the acting defence minister. All the others had fled because they feared air attacks.”

“Even I did not stay in Colombo. I was at several locations outside Colombo in case the Tigers attacked the capital city.”

Sirsiena’s latest statement is the first to suggest a Tiger air raid operating out of Tamil Nadu which in the 1980s provided safe haven to Sri Lanka’s Tamil separatists. However, Tamil Nadu’s support to the Tigers waned after they were blamed for the 1991 assassination of former Indian premier Rajiv Gandhi.

It was not immediately clear why he, as the acting defence minister, did not alert residents of Colombo to take precautions against possible Tiger air attacks, but stayed away from the capital for his own safety.

The Tigers had carried out several air attacks in Colombo and elsewhere using two Czech Zlin-143 aircraft between 2007 and 2009. The Tigers lost both their single-engine light aircraft in February 2009, three months before the end of the war on May 18, 2009.

Sirisena told Sri Lankans in New York that the top four men in the country left the island because of intelligence reports that the Tigers were going to unleash air raids on Colombo to take the heat off their cadres battling security forces in Mullaittivu.

Video footage of Sirisena’s meeting with New York-based Sri Lankans was shared on social media by reporters in Sirisena’s delegation.

While addressing the UN general assembly, Sirisena had asked the world body to leave his country alone to address accountability issues arising from the alleged atrocities in the final months of the war.