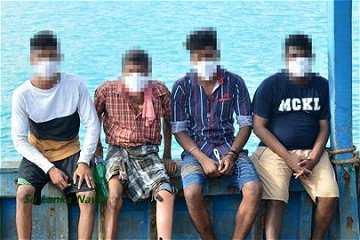 Sri Lanka Navy arrested four people including two attempting to migrate by a boat via sea route from India during a special operation carried out in the seas north of Thondamannar in Jaffna, on Saturday (11th July), the Navy Media Unit said.

A naval craft attached to the Northern Naval Command has detected a suspicious dinghy with the four men 11 nautical miles off Thondamannar North, Jaffna.

Upon investigation, it was found that two of them are Sri Lankans who had attempted to migrate from India and other two had sailed on 10th July from Point Pedro to the international seas passing IMBL to provide transportation for migrants.

Further, these two migrants were identified as previous residents of Valvettithurai and Mullaitivu areas and former LTTE members.

One of the suspects was admitted to Jaffna Teaching Hospital for treatment as he was having respiratory difficulties with chest pain. He was due to undergo PCR test for COVID-19 on Sunday.

The apprehended suspects are in the ages of between 21 and 52.

Other three persons will be kept separately and safely until they would be handed over for further investigation. They are also to be tested for COVID-19 by PCR examinations.

As precautionary measures under COVID-19 pandemic, the persons and the dinghy were disinfected following healthcare instructions.