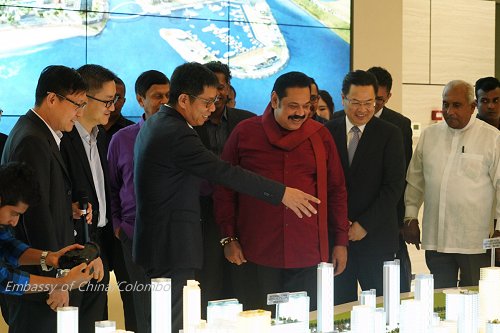 Speaking to the Xinhua News Agency after the official opening of the Colombo Port city on Saturday, the Premier said the friendly relationship between Sri Lanka and China has a long history and is unbreakable.

Prime Minister Rajapaksa said China has provided tremendous support for the development of Sri Lanka and Sri Lanka will always be grateful to China.

Dismissing the widely spread notion of a Chinese “debt Trap”, the Sri Lankan Prime Minister assured that the Chinese does not control Sri Lanka’s ports.

“China has provided tremendous support for the country’s development. We will never forget it. We do not believe in the so-called ‘debt trap’. There is also no such thing as China’s “control” of Sri Lanka’s ports, including Hambantota or situations that undermine Sri Lanka’s sovereignty.”

He said a series of major cooperation projects between the two countries, including Port City of Colombo and Hambanthota Port have promising prospects.

“Sri Lanka and China are true friends. Any problem can be easily, negotiated to resolve the issue,” PM Rajapaksa asserted.

On the evening of December 7, Chinese Ambassador to Colombo Cheng Xueyuan and Prime Minister Mahinda Rajapaksa attended the celebration ceremony to mark the official establishment of the Colombo Port City as permanent land in Sri Lanka.

Ambassador Cheng Xueyuan and Prime Minister Rajapaksa, accompanied by the person in charge of the Port City, first went to the project site to inspect the new land.

Later they convened the relevant department heads of the two parties to hold an on-site conference which focused on promoting project legislation and preferential tax policies.

In September 2014, during President Xi Jinping’s state visit to Sri Lanka, he and the then President Mahinda Rajapaksa laid the foundation stone for the Colombo Port City project, which is a project jointly developed by the Sri Lankan government and China’s CHEC Port City Colombo Ltd.

According to a statement by the Chinese embassy in Sri Lanka, since the beginning of this year, the project has successfully completed the first phase of land reclamation, and obtained the land confirmation document issued by the Sri Lankan government. Important progress has been made in the first phase and the second phase of land development will be officially started.