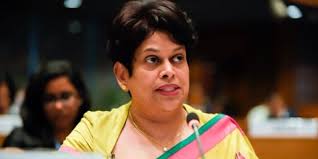 Sri Lanka has refused to agree to any external deadlines to complete its post war transitional justice process.

Speaking at the Security Council Open Debate on ‘Peacebuilding and sustaining peace: Transitional justice in conflict and post-conflict situations’ Sri Lanka’s the Permanent Representative to the UN, Kshenuka Senewiratne said that timelines evolved externally in achieving stated objectives would only seek to hinder the process of reconciliation since they would be bereft of ground realities.

She said that it is appropriate that when seeking mechanisms of transitional justice, related simple theories would need to take cognizance of the various historical, cultural and religious sensitivities.

The Ambassador said that action by the Sri Lankan security forces during the conflict was against a group designated as a terrorist organization by many countries, and even described as ruthless by some, and not aimed at any community in the country.

“The modus operandi of suicide attacks by this terrorist group which for the first time in recent history deliberately targeted civilians have now been adopted expansively by similar groups globally,” she said.

The Ambassador said that promoting a peaceful, just and reconciled society is not only an objective in itself, but also a pre-requisite for a sustainable and inclusive approach to development that leaves no one behind.

“As a sovereign State, Sri Lanka will continue to establish its own priorities towards this end. In our experience, while certain lessons can be learnt from others, it is imperative to chart our own path to reconciliation in order for it to be sustainable,” she said.

The Ambassador said that Sri Lanka is committed to find innovative and pragmatic solutions driven by the domestic context to protect the country’s national interest guided by the provisions of the Constitution, and the will of the citizens expressed through democratic means.

In this context, she said that Sri Lanka looks forward to continue its cooperation with the international community through capacity building and technical assistance in mutually agreed areas, in keeping with domestic priorities and policies.

The Ambassador was speaking in the presence of Yasmin Louise Sooka, a leading human rights lawyer who has been very critical of Sri Lanka over the past few years.