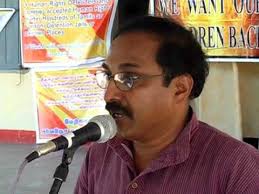 This week was full of interesting events happening in the political arena, and one of it is the debate on Northern Education Minister Dr. Kandiah Sarveswaran refusing to hoist the national flag at an event held at a school in Vavuniya.

In history there had been such events when Tamil National Leaders have shown their opposition to the national flag.

From S.J.V. Chelvanayagam to A. Amirthalingam, Tamil Leaders have criticized the national flag. Even the current leader of the Ilankai Tamil Arasu Katchi (ITAK) Mavai Senathirajah had made comments regarding the national flag.

On 16 November Dr. Sarveswaran was invited by the Northern Provincial Councillor A. Jayathilake to participate as the Chief Guest for an event at Perakum Maha Vidyalaya in Irattai Periya Kulam, Vavuniya. The issue erupted when Dr. Sarveswaran refused to hoist the national flag at the event. However, later the Principal of the school made arrangements for another higher official to do the honours.

This incident created much agitation among politicians in the South including Minister S.B. Dissanayake, who claimed that Dr. Sarveswaran is at fault and demanded an explanation from him. This incident also led to severe criticism of Dr. Sarveswaran’s action.

Northern Governor Reginold Cooray held a media briefing early this week in Colombo stating that he is to seek advice from the Attorney General’s Department prior to initiating action against Dr. Sarveswaran.

“Some are of the opinion that his conduct is contrary to the Constitution, hence he should be stripped of his ministerial portfolio and disciplinary action taken against him. I have gathered facts and details on the incident and prepared to produce them at the Attorney General’s Department. When I am advised on the action that I should take, as the Governor, I will immediately implement it.

“The action that I am going to take against Minister Sarveswaran would be solid and in full compliance with the law of the country and that is why I am meeting the officials of the Attorney General’s Department in person. The outcome in this case can be highly crucial to the Constitution, the Provincial Councillors and respect for the national flag and the anthem,” he added.

However, Tamil National Alliance (TNA) Spokesman Parliamentarian M.A. Sumanthiran, who is also an Attorney-at-Law said: “No! I don’t think they can take legal action. There is no violation of the law. I don’t think he disrespected the flag. He only refused to hoist it. Different people have different approaches to this. I know that the Northern Province Chief Minister C.V. Wigneswaran has hoisted the flag. I have hoisted the flag. Some individuals may not like the shape, colour and various things of the flag. However, the national flag of the country or any country for that matter should be given due respect.”

Sumanthiran also pointed out that if one makes an issue on refusing to hoist the national flag that can create unnecessary tension.

“When this particular national flag was formulated, there was a committee in Parliament that had two Tamil members G.G. Ponnambalam and S. Nadesan.

Nadesan did not endorse it but Ponnambalam acted otherwise and accepted the national flag. Now the Eelam People’s Revolutionary Liberation Front (EPRLF) is joining hands with the All Ceylon Tamil Congress (ACTC). It is the EPRLF leader who accepted this flag. It is the EPRLF that accepted the 13th Amendment to the Constitution.

Sumanthiran noted that creating such tensions will be playing into the hands of the Sinhala nationalists. “Such behaviour can be interpreted that we do not accept Sri Lanka as one country. I don’t think Sarveswaran had any wrong intentions but he must also remember that every action can be given various interpretations at a time like this.”

Meanwhile, Northern CM Wigneswaran commenting on the same issue said: “I do respect the actions of Minister Sarveswaran but at the same time I regret that such behaviour is detrimental to the people. The minister could have shown his disappointment to Sinhala hegemony in some other way.”

Wigneswaran further pointed out that a national flag represents or symbolizes the people of a country. “Citizens may have their own differences between themselves. Political parties may have their differences but we must not use such differences of opinion to show disrespect to the country. But I must add that I too share the same political reservations and resentment as Sarveswaran, owing to the attitude of successive Sri Lankan Governments.

“As Chief Minister, I have hoisted the national flag and shown my respect to the country and the people. I have also stood at attention when the national anthem is sung. I openly welcomed the singing of the national anthem in my mother tongue some time ago. Therefore one should realize that our resentment to Sinhala domination from 1948 has taken different forms. The education minister has shown his resentment in one way and I have shown mine in another,” he said.

“Without giving adequate recognition to the original inhabitants of this Island and their religion our national flag gives undue importance to the Sinhalese and Buddhism. This is the reason for the resentment harboured by the education minister. After all that is true. Tamil speaking people are the majority community in the North and East and they existed from pre-Buddhist times.

Thus the negative feelings of the minister are understandable.

“Therefore, I would appeal to Education Minister Dr. Sarveswaran to show his resentment to Sinhala hegemony in some other way rather than by such acts. But I do not think his conduct needs any further mention on our part. This is an occasion for our Sinhalese brethren to understand the hidden and negative feelings among us Tamils that have been festering in our hearts for a long time. We do not like to hurt our Sinhalese brethren. But our reservations are nevertheless true and real,” he said.

However, Dr. Sarveswaran while making his own explanations over this issue said: “I did not stop anyone from hoisting the flag, I only requested the zonal educational director to hoist the national flag on my behalf. From the day of introducing the national flag, those who have Tamil nationalistic views were reluctant to accept the flag. I did not disrespect the flag. I did respect it when the director hoisted it.”

He further said there was no provincial flag but a Buddhist one instead therefore Provincial Councillor Jayathilake hoisted it. “After hoisting the flag I went to the Buddha Statue situated within the school premises and paid my respects along with others.

“It was a peaceful event and I was happy to participate. But some are exaggerating it as an issue for their political agendas, especially to take legal action against me. They should first consider why I took this stand and the reasons behind it,” he said.

“Whenever a debate for a political solution was initiated in the past 65 years, there had been an argument for change of the national flag that is accepted by all communities and it started from the days of Thanthai Chelva to Amirthalingam and Mavai Senathirajah,” he added.