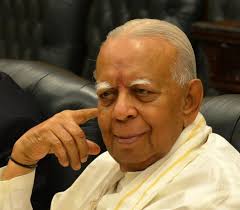 Former Media Minister Keheliya Rambukwella,MP, yesterday said that TNA leader R. Sampanthan had lost moral right to continue as the Opposition Leader in the wake of his 16-member parliamentary group coming to the rescue of PM Wickremesinghe.

Addressing the media, Rambukwella said that the Opposition Leader appointed by Wickremesinghe was working overtime to safeguard the UNP’s interests.The TNA’s unscrupulous decision to vote against the No Confidence Motion (NCM) against PM Wickremesinghe over his alleged involvement in treasury bond scams couldn’t be justified under any circumstances, the former minister said.

Rambukwella alleged that the Opposition Leader hadn’t uttered a word about the situation in the South. The TNA leader had ignored the grievances of people living in Southern Sri Lanka, the MP said, adding that the Trincomalee District MP was battling full time for Yahapalana government.

Sampanthan had been only concerned about the grievances of the people of the north and the east. Rambukwella strongly criticized the TNA Chief for pushing for further withdrawal of armed forces from the former battlefields.

Responding to a query Rambukwelle said that about ten more SLFP members were likely to switch sides when the parliament meets again.

Of the 41 member parliamentary group, 16 quit the government within days after the vote on the NCM.

Rambukwella said that the Sirisena-Wickremesinghe administration had been denied a two-thirds majority.