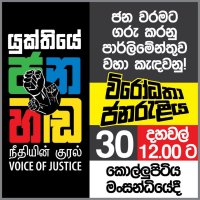 The United National Party (UNP) will stage a demonstration in Colombo today demanding to reconvene the parliament immediately and restore people’s sovereignty.

The demonstration will be held at Kollupitiya junction at 12 noon.

All UNP party members had been summoned to Colombo to take part in the protest, UNP General Secretary Akila Viraj Kariyawasam told a media briefing held at Temple Trees yesterday.

He said the some SLFP and even SLPP members were prepared to support Prime Minister Ranil Wickremesinghe and will join the UNP shortly. UNP will prove that it has a massive majority in Parliament, he added.

The UNP General Secretary asked the public to rally around the UNP to ensure democratic values are protected in the country.