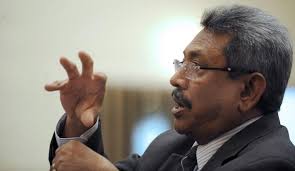 The shadow of former Defence Secretary and Rajapaksa sibling Gotabhaya Rajapaksa looms large these days over the Sri Lankan political firmament. Not yet officially nominated as a candidate for the 2020 presidential elections, he appears to have assumed that role by default. Still, Rajapaksa found out last week that the publicity he generated made not be the type that furthers his cause.

The controversy began at an alms-giving conducted to mark Rajapaksa’s 69th birthday. All the politically active Rajapaksa siblings, Chamal, Mahinda and Basil were also in attendance. It is also noteworthy that some parliamentarians from the ‘group of sixteen’ who recently left President Maithripala Sirisena’s government- notably John Seneviratne, Dayasiri Jayasekara and Thilanga Sumathipala- were present on the occasion.

The Rajapaksas being always adept at courting the support of Buddhist monks, the anunayake of the Asgiriya Chapter, Wendaruwe Upali Thera was at hand to deliver a sermon. It was this sermon that raised eyebrows.

“We need a leadership that is tied to the Sinhalese and Buddhists. However, we see that the dhamma is not functioning in the country. As a result, there is a crime wave. Therefore, the Maha Sangha feels the need for a just ruler. You have been called a Hitler. You must mend this country even if it means becoming a Hitler. Conduct a military rule if necessary and mend this country,” Upali Thera said in his sermon, with Gotabhaya Rajapaksa seated in front of him.

Excerpts of the sermon were broadcast on a private television network known to support the Rajapaksas. That was when the gravitas of what was said was felt in the Rajapaksa camp: Gotabhaya Rajapaksa was being compared to and urged to emulate a leader who was a ruthless dictator who was responsible for the genocide of over five million people, a leader of whom even the Germans are ashamed of.

Of course, Upali Thera would not have meant his remarks to be taken in a literal context. No one would expect Gotabhaya Rajapaksa, if elected, to embark on a genocidal spree or to open concentration camps. However, he was being portrayed as a strongman who brooked no nonsense and he was urged to go a step further if necessary- to set up military rule, if that was thought to be required.

Critics of the Rajapaksas were quick to seize on the comments. President Maithripala Sirisena told a meeting in Nikaweratiya that, as a Buddhist he had the highest respect for the clergy but could not agree with the senior monk of the Asgiriya chapter who invited Rajapaksa to “be a Hitler and establish military rule”. The President said he was “saddened” by Upali Thera’s remarks.

Prime Minister Ranil Wickremesinghe said that he would have condemned the statement immediately if it had been made in his presence. “There is no way Buddhism and Hitler’s brutality can be reconciled,” Wickremesinghe told a public meeting in Matara.

In a similar reaction, the German Ambassador in Colombo also condemned the monk’s remarks. Jorn Rohde said that he fully agrees with President Maithripala Sirisena and Prime Minister Ranil Wickremesinghe’s condemnation of the “outrageous remarks” made by Upali Thera.
“The remarks only demonstrate that wearing a robe does not prevent individuals from issuing irresponsible and plain stupid statements. We need more democracy- not less- all over the world,” the German envoy said.

Until these comments began to emerge, the Rajapaksa camp had remained silent regarding the remarks, perhaps hoping that, in a media saturated with news, it would be replaced by the next controversy without attracting much attention. That was not to be. The comments were already generating plenty of discussion and debate in social media.

Dayan Jayatilleka, political scientist and an ardent loyalist of the Rajapaksas was quick to realise the damage this could do to the potential candidacy of Gotabhaya Rajapaksa. Writing to the mainstream media he stated that “I was more alarmed by what I saw and heard on TV news last evening than by anything I have seen or heard in the Sri Lankan media throughout my life. It would be the most dangerous public statement that could be uttered in any country in the world.” Jayatilleka went on to add: “let me be very clear. I am not saying that Gotabhaya Rajapaksa shares these views or will adhere to this sage counsel.” Clearly, the panic buttons were being pressed in the Rajapaksa camp. This issue had the potential to snuff out Gotabhaya Rajapaksa’s potential presidential election campaign even before it could begin. Faced with this prospect, it went in to damage control mode.

The anunayake thera concerned issued a statement. In his statement, Upali thera said that he only said some people compared Gotabhaya Rajapaksa to Hitler. “I only asked him to develop the country. In governing a country, firm policies are required. I never wanted him to equal the barbaric administration of Hitler that annihilated people”, he said, adding that his lengthy speech had been taken out of context by some politicians with vested interests.

Gotabhaya Rajapaksa himself was confronted with questions about the issue. That was when he attended the Financial Crimes Investigation Department (FCID) this week to make a statement over an alleged misappropriation of government funds to build a monument for his parents. This followed an undertaking he gave to the Court of Appeal that he would provide such a statement.

Emerging from the FCID after several hours of questioning, Rajapaksa said that those who have not fathomed the context of the sermon are making various comments. “I’m an ordinary person and not someone of importance. I don’t know the reason for issuing so many statements over a sermon at a private function at my residence”, Rajapaksa said. Critics have however pointed out that Rajapaksa has stopped short of condemning outright the remarks made by the thera or even dissociating himself from them.

A candidacy for Gotabhaya Rajapaksa, most likely from the Sri Lanka Podujana Peramuna (SLPP) has yet to be formalised. However, he has emerged as the clear frontrunner among the Rajapaksa siblings for the task. Unfortunately for him, this controversy will make his task that much harder.

That is because victory at a presidential election requires over fifty per cent of the vote to win at first count. All previous presidential polls have been decided in this manner but all winners have had the support of the minority vote- except Gotabhaya’s brother Mahinda Rajapaksa in 2005 and in 2010.

In 2005, while Mahinda Rajapaksa didn’t have the support of the minorities, he managed to engineer a boycott in the North and East that deprived Ranil Wickremesinghe of some 700,000 votes. Rajapaksa’s winning margin was a wafer thin 180,000 votes. In 2010, although Mahinda Rajapaksa did not have the support of the minorities, that did not matter as the poll was held in the aftermath of the war victory and the South voted overwhelmingly for him to offset the shortfall of votes in the North and East.

The moral of the story is that, under normal conditions- such as the circumstances existing now- it would be almost impossible for a presidential candidate to win at first count without the support of the minority communities. Gotabhaya Rajapaksa never had much support from the minority communities. With the recent ‘Hitler’ controversy, what little sympathy he had may have been lost. If that happens, it is partly his own doing because he hasn’t been bold enough to categorically condemn Upali Thera’s comments. He has had the opportunity to do so but has chosen not to do that.

Whether this controversy is merely a storm in a tea cup or whether it transforms into a political tsunami remains to be seen. However, Gotabhaya Rajapaksa is learning that hard way that careless talk can not only cost lives, it can cost presidential aspirations as well.