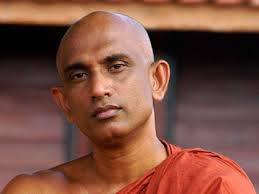 The Thera told a news conference that he expected the government would carry out its responsibility in dealing with these issues.

“It is regrettable in the way the previous government and the CID behaved in the matter regarding Dr. Shahabdeen. The government should conduct a proper investigation into this matter,” the Thera said.

He said a special committee should be appointed to look into the controversy involving the Shariya University of Hisbullah and added that the judiciary should be allowed to take up these matters without political intervention.

“We do not hope to stage protests or convene media conferences to remind the government of these matters. We hope it would carry out its responsibility,” he said.

The Thera said the country needed one law including one education policy and one marriage law.

Ven. Rathana Thera said he expected that the government would not implement detrimental pacts such as MCC, SOFA and ACSA proposed by the previous government.

“The UNP should do a self-criticism on the above agreements. Everyone should protest against any agreement detrimental to the country without any political differences,” he said.

Speaking on the presidential election, the Thera said the Sinhala people had proved that they could unite and establish a government without the support of the minority communities.

“The government received less than 5 per cent votes from the minority communities including Tamils and Muslims. Buddhist monks supported President Gotabhaya Rajapaksa’s victory without political differences,” he said.

Ven. Rathana Thera said the hunger strike launched by him after the Easter Sunday attack against extremists became a decisive factor in the presidential election.

Vaiko arrested for protesting against President Rajapaksa’s India visit
Will be frank with New Delhi to avoid misunderstandings: Gotabaya
Comment