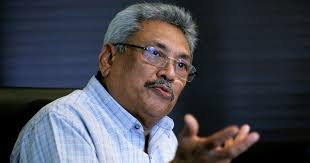 Former Defence Secretary Gotabhaya Rajapaksa yesterday said that if he was nominated to contest the next presidential election, he would renounce his US citizenship and he would be able to do so within two months.

Rajapaksa was addressing the media after making a statement to the Financial Crimes Investigation Division (FCID). He said he had not been invited by the former President Mahinda Rajapaksa to contest the election.

Gotabhaya was summoned by the FCID for alleged misuse of state funds to construct the D.A. Rajapaksa museum at Medamulana.

Asked to comment on the controversy over Asgiriya Anunayake Ven. Vendaruwe Upali Thera’s referece to Hitler and military rule at an alms giving at his house, the former Defence Secretary said he had understood what the prelate meant, but there were certain elements who had not been able to do so and they were making false claims to discred the prelate.