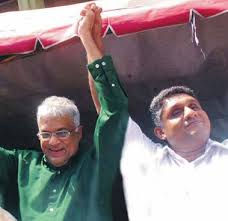 Leader of the United National Party (UNP) and Prime Minister Ranil Wickremesinghe has told UNP Deputy Leader Minister Sajith Premadasa to be prepared to assume a greater leadership role in the party during the UNP working committee meeting held yesterday.

Prime Minister Wickremesinghe had told Minister Premadasa to prepare to come out of the Hambantota District and go around the country solving people’s problems.

The Working Committee meeting chaired by Prime Minister Wickremesinghe was held at the Sirikotha UNP Head Office to discuss the No-Confidence Motion (NCM) and the party’s future.

At the meeting a resolution to back the Premier during the NCM debated on April 4 was passed unanimously.

It has been reported that no idea or suggestion was presented at the Working Committee meeting that the Premier should resign from the leadership position and even the working committee member MP Range Bandara who earlier made divisive statements was present at the meeting.

The Working Committee was of the view that it was not appropriate to discuss the reorganization of the party before the no-confidence motion against the party leader and agreed to discuss the party reforms at length after April 4th.

The Working Committee has discussed why the positions of the party should be changed and has set a deadline of April 30th to reform the party.

The Prime Minister has stated that those holding positions in the party should fulfill their responsibilities and that the problems arise only when they do not do so. He has pointed out that there is no point in blaming the leadership without members carrying out their own responsibilities.

Former Minister Joseph Michael Perera at the meeting has expressed his views at length on how to reorganize the party.