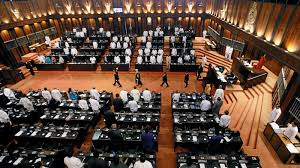 A special meeting of party leaders is scheduled to be held this morning under the leadership of Speaker Karu Jayasuriya. The party leaders meeting will be held at 11 am at the parliamentary complex.

Much attention is expected to be paid at today’s meeting on the issue of providing the telephone recordings tabled in the House by MP Ranjan Ramanayake to the members of parliament for review.

The final Parliamentary Session for this month will be held today and Parliament will meet at 9.30 am today.

It is planned to hold a debate this morning on the Vote on Account that will be presented by Prime Minister Mahinda Rajapaksa for the purpose of obtaining approximately Rs. 367 billion supplementary funds.

After today, the Parliament session will be postponed until 3rd of March, however according to the 19th Constitutional Amendment the President has the power to dissolve Parliament on the 2nd of March.