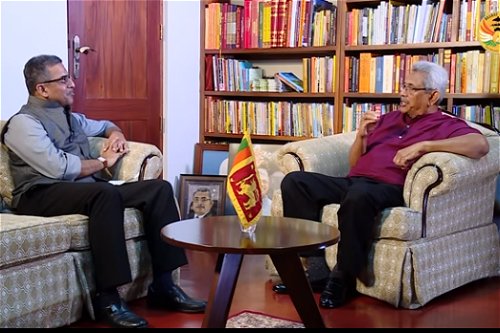 Sri Lanka President Gotabaya Rajapaksa says leasing the Hambantota port to China for 99 years was a mistake made by the previous government.

“We are not afraid to see this as a mistake, even though China is a friend of ours and they are aiding our development,” President Rajapaksa said in an interview.

He said the people were dissatisfied with the agreement and said that “we should reconsider it as it is not for two years but for the future.”

The President made these remarks in an interview with Nitin A. Gokhale, Editor-in-Chief of ‘BharatShakti.in’ in Colombo in his first interview after taking over the top political job.

The interview, which was his first solo media interaction as President, comes a few days ahead of his first overseas visit which is to New Delhi scheduled for later this week.

President Rajapaksa said that Sri Lanka wants to be neutral and has no intention of intervening in the power struggle of world superpowers. It was not his policy to do anything that would harm any country, he said.

“We don’t want to get in between the power struggles of superpowers. But we want to work with all countries,” he said.

He said India, Singapore, Japan and Australia were fearful of Chinese intervention but said it was only a commercial transaction and urged them to invest in Sri Lanka instead of letting only one country.

He also said that he wanted to see such countries come to invest in Sri Lanka and that he would create a friendly environment for investment by eliminating the difficulties associated with the regulations.