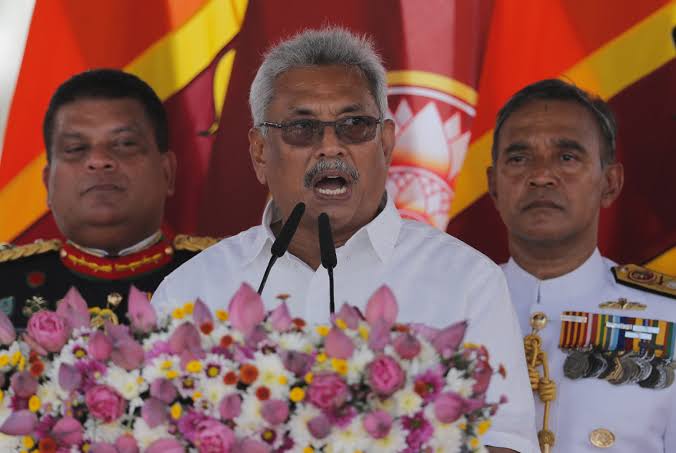 Gotabhaya Rajapakse is the first president who has been elected by the Sinhalese votes only despite hundreds of allegations made on him with regard to war, killings, disappearances, and white-van abductions and war crimes.

He is the one who has never been as a politician and a party leader but served as an ex-military officer and a former Defence Secretary has been elected as the president with the overwhelming votes of the ethnic majoritarians even in the very first election that he contested in history.

Although he contested in the presidential election with the metaphors stating that he is the heir of the Rajapakse’s family politics and brother of a former president who won the war, he has been viewed by the majority of the Sinhalese as a key person of the war victory, decisive decision-maker and a disciplined man, all of which are his personal personality that has been the reason for his victory in this presidential election.

People belonging to ethnic majoritarian community wanted a disciplined, strict and authoritarian who gives commands to get the things done in order to patch up the things prevailed during the Mahinda’s regime and during the government of good governance and to restore the Sinhalese nation. This also determined the Gotabhaya’s victory.

On this basis, the decision he makes and the procedures that he makes it practice after he took his office continue. He has begun to focus on the things that easily attract and reach the people. The most important of which is the Sri Lankan administrative structure. Administration of Sri Lanka, which has been the war torn for more than three decades, has been getting worst and deteriorated because of the politicians who influence the bureaucracy, officials, lazy officers, corrupt officers and inappropriate and unskilled staffs. Gotabhaya keeps on focusing on rectifying the above mentioned issues, and overcoming the issues of the people that they face in their daily life.

Gotabhaya suddenly visits the state departments and government offices where he offers his own solutions on the spot to the issues faced by the people. This practice was with Premadasa, the hero of underprivileged people, who came to power in the 1990s. That is what made Premadasa as the leader of the people.

He has taken the decisive decision to appoint Administrative Officers and highly educated officers in the political appointments that occupied the country’s top positions in the state institutions including state corporations, government departments, banking services including the Bank of Ceylon, People’s Bank and Central Bank and foreign diplomatic services and he has started implementing his decisive decision made in this regard. He ordered the diplomatic service officers who serve irrelevant disciplines to return to Sri Lanka after finishing their jobs. It could be seen that age, experience, talents, soft corner and ethnicity have been somewhat considered in the nominations of the governors. It is said that Gotabhaya is determined to appoint a Tamil as the governor of the Northern Province though a prominent politician in the north recommended the former governor Chandrasri as the Northern Provincial government. In addition, only a few military officers are nominated to the state administrative structures rather than it was expected.

According to sources, cabinet ministers, deputy ministers and state ministers have been ordered not to give personal appointments including Personal Secretary to their relatives. It has been ordered to give priority to talent in state appointments. It is reported that 1 lakh persons belonging to poverty-stricken families will be provided employment in their own districts.

Based on the information available, it could be guessed that Tamils in the administrative services will continue as the Government Agents in all five districts in the Northern Province. Government Agent of Batticaloa district in the Eastern Province is a Tamil.

It is said that foreign trips, excessive escorts and luxurious expenditures of ministers, parliamentarians and high ranking government officials have been controlled.

Though these actions may be the actions for collecting votes for Podujana Peramuna in the upcoming general election, it doesn’t appear that these actions are taken by targeting only on the election since it seems that Gotabhaya is in an attempt to smash the political domination of the administrative sector prevailed over the past several decades. After the general elections only, we can be able to tell whether this practice will continue or be victorious despite the family’s political influence and the political domination of his esteemed brother. Because, the supporters and close associates of the Prime Minister Mahinda Rajapakse, who lost power after 2015, are waiting to taste the power and luxurious life by bringing the Podujana Peramuna to power.

However, in the cabinet formed after Gotabhaya sworn in as the president, many of the those who had been leading in the cabinet a decade before the year 2015 have been pushed back and a few of them have been selected to be promoted. Likewise, Gotabhaya hasn’t made efforts to appease those who were defeated in the election, politicians and his supporters by giving them appointments as the heads of state institutions. Therefore, we have to wait and see whether Gotabhaya will hold this stance after the general election also.

On the other hand, the new President Gotabhaya is in a critical position as either repeal the 19th amendment or continue with it will be problematic to him. In particular, his brother Mahinda Rajapakse will be elected as the Prime Minister if Podujana Peramuna wins a two-thirds majority in the general election. The 19th amendment to the constitution has increased the powers of the parliament and the Prime Minister by restricting the limitless executive power that the president had.

There is no doubt that President Gotabhaya will be a bit uncomfortable with the 19th Amendment, which does not allow the President to hold the Ministerial responsibilities and additional departments under his control other than a very limited number of departments and the Ministry of Defence. Apart from that, the President will be somewhat uncomfortable with the Public Service Commission, the Judicial Service Commission and the Constitutional Council. Therefore, President Gotabhaya Rajapaksa will make efforts to remove many aspects of the 19th Amendment.

But, the victory in the general election is determined by the votes earned by the candidates of each political parties contesting on the basis of villages, cities, municipalities and provinces. Looking at on this basis, Podujana Peramuna could earn only 14 lakhs more votes than the competitive party in the presidential election.

But, it is questioned that can the increasing actions that are being taken against the minorities get the support from the minority parties. Besides, do the opposition parties and minority parties want to overthrow the power of parliament that could keep President Gotabhaya Rajapaksa in check?, the question arises.

Many have doubts whether Mahinda Rajapakse, his close associates and SLFP members who were affected in the new regime would like to change the 19th amendment completely though they do not speak out about it. Because, no one can deny that Ranil Wickremesinghe’s 19th amendment has put a check on Gotabhaya Rajapakse, who has become as a president by Sinhalese votes only, and created a number of headaches to Gotabhaya.

However, despite advices of his brother Mahinda Rajapakse are taken into account, the bold decisions made by President Gotabhaya Rajapakse have dissatisfied them, according to the inside sources.

Therefore, the conflict between a party thinking about their politics, their future interests, and the succession of the heirs and a President thinking about the well organized administration of the country and development of the nation will continue.

Therefore, it is questioned whether members of ruling party consisting of Podujana Peramuna and Sri Lanka Freedom Party will give their support to abolish the 19th amendment in order to give the limitless executive power to President Gotabhaya for the next five years.

In such a political environment, will President Gotabhaya who is in an attempt to retain the victory that he got in the Sinhalese nation either make efforts to win or win the Tamil nation which is separated by minds in order to create a nation that is not divided?