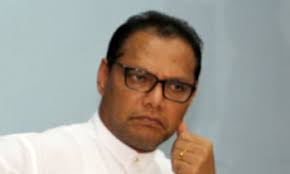 Responding to asummon from the CID, MP Dayasiri Jayasekara arrived at the Criminal Investigation Department around 10 am today. He was questioned until 5:30 pm and a statement was recorded, the Police Media Spokesman said.

The parliamentarian has left after the interrogation without commenting to the media.

MP Dayasiri Jayasekara had recently stated that he had received Rs. 1 million from a subsidiary of Perpetual Treasuries Limited for the 2015 parliamentary election campaign.