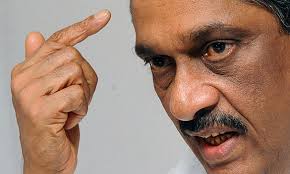 In the wake of a crippling petroleum strike and a wave of protests against the Government, Cabinet Spokesman Minister Rajitha Senaratne made a shock announcement yesterday that President Maithripala Sirisena had requested wartime army chief Field Marshall Sarath Fonseka to take over the military as commander or Chief of Defence Staff in order to bring “discipline” to the country.

Addressing the weekly Cabinet briefing last afternoon, Minister Senaratne said that a series of political motivated strikes and trade union action were disrupting public life with the aim of toppling the ruling Government. The former army commander turned politician and cabinet minister, Fonseka was the “best person” to control the situation, the Cabinet Spokesman added.

“A country without discipline can never develop. Everyone knows that Sarath Fonseka is a very disciplined official,” Senaratne added.

A room full of shocked reporters at the Government Information Department repeatedly requested clarification on the development.

“The Field Marshall said that if he was given the necessary powers he was willing to take over the responsibility,” Minister Senaratne said.

The Minister said that while the trade unions were entitled to protest, the recent actions were politically motivated strikes aimed at putting the Government in difficulty.

“People say the Government has no backbone to deal with these strikes. We are about to develop a backbone,” the Cabinet Spokesman charged.

He insisted however that the Government would not resort to tactics used by the former Defence Secretary Gotabaya Rajapaksa to crush public protests. Repeatedly asked by journalists if under Field Marshall Fonseka’s command the military would be used to attack protestors, Senaratne replied: “We will see how the protests will be handled at that time.”

It was subsequently clarified however that Fonseka was being called upon to lead a special cabinet appointed committee that will deal with emergency situations and disruptions to essential services that could arise as a result of protests and trade union action. The committee is to include members of the tri-forces.

Deputy Minister Karunaratne Paranavithana also told Daily FT after the press briefing that the President had only urged Fonseka, who currently serves as Minister for Regional Development, to step in to marshal the military in times of national emergencies, such as the Meetotamulla garbage mountain tragedy or the recent petroleum strike. “The military needs a go-getter in these situations that is all; it is not that Field Marshall Fonseka is going to lead the army against striking workers,” Paranavithana clarified.

As Commander of the Army, then Lt. General Fonseka has never been directly accused of war crimes but he remains under a cloud given allegations of widespread military excesses and war crimes committed by the forces under his command during the final phase of the war.

Highly placed ministerial sources who attended the Cabinet meeting on Tuesday said the Government was considering issuing an essential services order, with the military on standby to take over essential services in the event of crippling trade union action. The move was considered urgently in view of speculation about a general strike being organised across the state sector, to protest against the private medical college SAITM, the sources said. Following Monday’s petroleum strike that created panic fuel buying and long lines at fuel stations that created huge traffic blocks in the capital, a ministerial source said the Government would have to consider calling in the forces to ensure the smooth distribution of fuel and other essential services, including electricity and water, in the event of major trade union action.