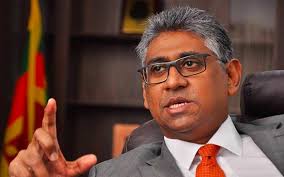 Response of Muslim politicians, religious organizations and even civil society to the failure of the government to prevent violence against Muslims in the central hills early this month is deeply disturbing.

The senseless destruction of Muslim owned property and their commercial establishments, striking at their very survival, is enough for any Muslim politician with an iota of self-respect to leave the government as a mark of protest against its failure.

True to this image, some Muslim parliamentarian accompanied President Sirisena in his visit to Pakistan this week, helping to cover up the crime against Muslims in the central hills and hoodwink the world. They included S. M. Marikkar, Hisbullah, Ishak Rahim, Mastan Cader and Ali Zahir Moulana.

They are so shameless and willing tools serving the government that Minister Faiszer Mustapha gladly went to Geneva this week to defend Sri Lanka at the 37th UNHRC session. As a Muslim, did he speak a word about the misery caused to the Muslims in Sri Lanka?

However, still there is a silver line of hope as MP Mujibur Rahman refused to be part of President Sirisena’s team to Pakistan, as a protest against government’s failure to protect Muslims. He was one of the few Muslim MPs who vehemently condemned the attacks on Muslims in the central hills, despite bringing to the knowledge of President, Prime Minister and even the IGP of the anticipated violence against Muslims.

While politicians failed to protect Muslims, the role of religious leaders and civil society equally disappoint and threaten the interest of the community.

For example a delegation of about fifteen civil society groups led by the religious body All Ceylon Jamiathul Ulama (ACJU), met President Sirisena on Thursday March 8, 2018 – fifth day after the attack.

This is a political issue and not a religious matter. Thus, the question why the ACJU gets involved in such a burning political issue? This also demonstrates the overall political bankruptcy of the community

During the meeting none of the participants asked President Sirisena “why he failed to stop the attacks despite numerous reports about this anticipated attacks? Perhaps they did not want to antagonize the President.

On the other hand, what is the use of this meeting after the damage was already done. Instead the ACJU led team, according to Ceylon Daily News report on 9 March 2018, extended their fullest support to this very same President Sirisena to establish a peaceful atmosphere conducive to all Sri Lankans to live in peace.

Support for what? Allowing racists to burn and destroy mosques and Muslim properties?

It is true that there are some issues such as the black abaya, face veil, using loud speakers during call for prayers especially in areas where predominantly non-Muslims live, remain a source of irritants to non-Muslims.

Many fair minded non-Muslims, who are keen on communal harmony, were urging Muslims to address these issues. However, the ACJU has miserably failed the community and thus the country on these issues.

Instead, in a statement issued more than a year ago and published in the Tamil Muslim daily Nava Mani, the ACJU president stated that face cover and black abaya are compulsory. However, he failed to quote any source from the Holy Quran and Hadeeds to justify his claim.

In this regard it is worthy to note that in his book “HIJAB or NIQAB-An Islamic Criique of the Face Veil” London based late Egyptian Islamic Scholar Syed MutawallyAd-Darsh had this to state;

“I disagree with the statement that niqab (face-veil) is an obligation and have been at pains to explain this from the outset. There is no hard or unquestionable proof in the holy Qur’an or Sunnah to that effect. Otherwise, we are going to question the integrity or scholarship of the overwhelming majority of the learned community of Islam? I find myself amazed by the claims of latter day scholars who say “But we live in bad times… or society is bad…. Now women should observe this or that…..” This is illogical attitude which opens the door to discarding Islamic rules, such as the government controlled muftis who say that modern banking is different from the lending and usury of time past. This is a very dangerous trend indeed”.

What the ACJU need to understand is that we are living in a different era where there is a powerful global military campaign, the worst ever in known Muslim history, against Islam and Muslims. This well planned and coordinated campaign has been unleashed by Israel, the sworn enemy of Islam and Muslims since the time of Prophet Muhammad (PBUH) and its United States, British, French and Russian collaborators backed by their Arab tyrants in the Gulf. India’s anti-Muslim RSS front BJP government of Prime Minister Narendra Modi has joined these war mongers.

These forces, which rape and ravage Muslim countries in the Middle East and beyond, who supported the recent genocide of Rohingya Muslims, are here in the island with their own agendas against the island’s Muslim community. There are willing mercenaries among the Sinhalese to implement their evil agendas on the Muslim community.

Sri Lankan government’s failure to condemn this genocide, indicate its changing policy towards Muslims. This also indicates that Maithri-Ranil government has been absorbed into this war mongers’ axis. This perhaps may be the reason why the government gave a free hand to racists to attack Muslims in the central hills early this month. The inevitable result is the political instability of the island.

The irony is that reports now emerge that besides the mob, the Special Task Force also terrorized people, when they entered into mosques with their boots and attacked Muslims at prayer.

For example, according to reports, they entered the Hijrapura Mosque at the peaceful Muslim village of Kumbukkandura adjacent to Digana, and attacked those praying, including the elderly, and taken with them two persons who were inside the mosque. They were beaten, terrorized and saved only because of the timely interference of a compassionate Buddhist Monk.

Muslim votes played a crucial role in Mr. Maithripala Sirisena becoming President and Mr. Ranil Wickremesinghe as Prime Minister, after he lost more than 28 elections. The tragedy is that these violence against Muslims are taking place under this very same Maithri-Ranil government.

Meanwhile, in one of the most disgusting statements, never expected from a man of his standing, Elections Commission Chairman Mahinda Deshapriya claimed most Sinhalese seemed happy about recent attacks on Muslims in Ampara and Central Hills.

What has the peaceful Muslim in the central hills have done to deserve this punishment and how could people who claim to follow Buddhism be happy about inflicting misery on others? Isn’t this sheer sadism?

Betraying his racist mindset and displaying his ignorance, he threw a challenge to Muslims with a question whether they would invite a Buddhist monk for a lecture in a totally Muslim institution. Inviting Buddhist monks as chief guests and chief speakers in many important Muslim functions have been a common occurrence.

He said, embracing some aspects of Arab culture by Muslims in Sri Lanka is fanning fires of distrust. He referred to the changing dress code, especially of Muslims women such as the black abaya. This is a matter the ACJU should have advised the community years ago. However ACJU failed miserably.

The time has come when Muslims need to return to Islam, Islamic way of life and take precautions to protect their families, properties and livelihood.

Time has also come for the ACJU to wake up to the realities and prepare itself to guide the community and bring about better understanding among people of all communities. Thus the need of the hour is to overhaul the entire ACJU to bring in ulemas with integrity and whose images were not tarnished, who are not controversial and who feel for the community and respected by the community

In the absence of a proper media, it is essential that Juma sermons in every mosque be devoted to subjects that would educate the Muslims of the precarious environment we live in, the powerful and sinister forces conspiring against the community, and the need for the community to be vigilant.

Indications are that the attacks on Muslims in the central hills were not isolated and the predictions are that worse is yet to come.