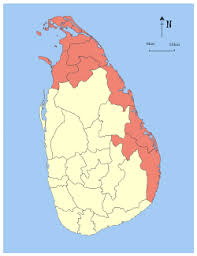 Eight years after the war ended there is persistent poverty in the north and east while incomes remain far lower than in other parts of the country, the latest Household Income and Expenditure Survey (HIES) shows.

Such low incomes are reflective of the high levels of poverty in the war-affected districts particularly, Trincomalee, Batticaloa, Mullaitivu and Killinochi, with double digit poverty head count of 10%, 11.3%, 12.7% and 18.2%. In Killinochi, the poverty head count has almost increased by 43% from the 2012/2013 HIES survey when it was 12.7%.

In recent months, analysts have also pointed to high levels of indebtedness in the north and east. This is not measured by the HIES survey. President Maithripala Sirisena drew attention to the crisis at the launch of the Gramashakthi programme on Friday. He said he was aware of the huge burden placed on poor families when repaying their loans. Those in the north and east especially have become victims of banks and financial institutions.

These enterprises entered the area soon after the war and distributed microfinance loans. The people were now being forced to repay the debt with interest which is beyond their means. The President said the Government would offer them relief in the 2018 budget. “The upcoming Budget should, in addition to debt relief, provide considerable investment in the rural economy, if districts left behind since the end of the war are to be integrated in any meaningful way into the national economy,” said Ahilan Kadirgamar, a political economist based in the north.

“Given the seriousness of poverty and low incomes in these war-affected districts, and with large sections of the population living at near poverty levels in the estate districts and some rural southern districts, targeted measures at poverty alleviation are unlikely to work,” he said.

“It requires much stronger social welfare safety nets and income generating investment in the rural economy to ensure that another agricultural crisis such as the long drought does not dispossess more people and throw them deeper into poverty,” he emphasised.