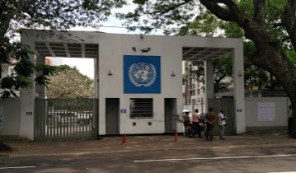 A group of monks visited the United Nations (UN) office in Colombo today and sought an investigation into recent incidents in Sri Lanka.

The monks, including the Sinhala Ravaya, also sought UN invention to release several suspects arrested when the state of emergency was in force following the violence in Kandy.