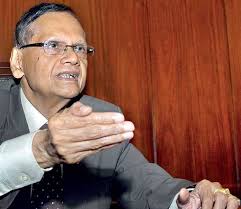 (Text of Media Release Issued by the Sri Lanka Podujana Peramuna Chairman Prof.G.L.Peiris on Behalf of the Joint Oppostion)

Sections of the international media have continued to amplify and broadcast the Sri Lanka government’s propaganda that the Joint Opposition or the Sri Lanka PodujanaPeramuna was responsible for the recent Sinhala-Muslim disturbances in Kandy. In a story datelined March 25. 2018, Reuters has stated that “Police and politicians backed by the country’s former strongman President MahindaRajapaksa joined anti-Muslim riots that rocked Sri Lanka’s Kandy district this month…” This article is based on allegations made against the SLPP by the Law and Order Minister and the Cabinet Spokesman. The latter is quoted as having stated that one SLPP local government representative named Samantha Perera was under investigation for ‘attacking Muslim-owned shops and mosques with stones’.

The Reuters article stated that CCTV footage shows Perera, pointing at the higher floors of a building opposite a mosque, and that according to the Cabinet Spokesman, another SLPP local government representative had been arrested for ‘setting fire to a mosque’. Samantha Perera has informed us that he had been trying to control the crowd and send them away and that there isCCTV footage to prove it. The wife of GaminiRajapakshe, (no relation of the Rajapaksas who lead the SLPP) the SLPP local councilor who has been arrested, informs us that her husband had been arrested near the Narampanawa junction about 100 to 150 meters away from the Menikhinna mosque when he was returning home from his workplace. There is an obvious attempt to frame members of the SLPP.

Even though the police Spokesman stated that he had been arrested while setting fire to a mosque, we learn that the Menikhinna mosque was never burnt but had only been attacked with stones. From the moment disturbances broke out in Ampara and Kandy, the government has been trying to lay the blame for these incidents on the SLPP. We have already issued two statements pointing out among other things that these Sinhala-Muslim disturbances which are now increasing in frequency, were first started several years ago to destabilize the Rajapaksa government and that the reason why the present government never appointed a Presidential Commission of Inquiry into the incidents that began in 2012 and culminated in the Aluthgama disturbances 2014, is because all the perpetrators are among the founders of the present government.

Despite this, the government keeps trying to pin the blame for these incidents on the SLPP, in the hope that they will be able to motivate the Muslim people to vote en masse with the present government as they did in January 2015. A section of the international media has been helping the government in its propaganda effort. Recently, the London based Guardian in an article on the Kandy incidents quoted Alan Keenan of the International Crisis group who said that this violence can be related to ‘the growing strength of the Rajapaksa led opposition’ and that these clashes were being motivated by ‘a need to look for new enemies to unite the Sinhalese and to win votes’. Despite the efforts of various interested parties, nobody in this country, particularly the Muslim community believes these stories anymore.

When the SLPP recently held a press conference on this matter for foreign correspondents with the participation of former President Mahinda Rajapaksa, the AFP correspondent in Colombo wanted to know why we were having that press conference at all because nobody was holding the SLPP responsible for these incidents except for some attempts at political mud-slinging by members of the government. That in fact is the prevailing view in Sri Lanka.

Our position on these incidents that have been occurring from time to time over the past several years is firstly, that all those responsible for the violence should be brought to book, and secondly that a Presidential Commission of Inquiry should be appointed to inquire into all such incidents going back to 2012.