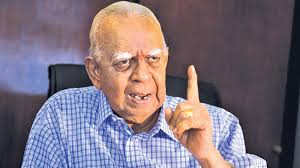 “Tamils of the north and east publicly commemorate the “Maveerar” by smashing down the obstacles without fearing the intimidations. We are satisfied and delighted because of this”, stated the Tamil National Alliance leader R. Sampanthan.

Sampanthan, who stated that Information Department of Mahinda’s fake regime published an intimidation report stating that the government had not given permission in any occasion to the “Maveerar Day” events, highlighted that military and police have functioned in a way to intimidate the Tamils in north and east for the past couple of days.

He added that he is satisfied and delighted as the people of Tamil’s homeland publicly commemorated the “Maveerar” at “Thuyilum Illangkal” by smashing down the obstacles without fearing the intimidations.

He further added that he could not be able to directly take part in the “Maveerar Day Commemorations” that were sensitively observed by the people since he was supposed to participate in the parliamentary session.

Meanwhile, Sampanthan, who expresses his sadness as he could not take part in the commemorations, added that he personally commemorate the “Maveerar” at Colombo.