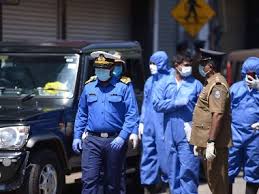 Tests have confirmed that 180 Navy personnel have so far contracted the coronavirus.

Army Commander Shavendra Silva, who heads the National Operation Center for Prevention of COVID- 19 Outbreak, said that all 180 Navy personnel are from the Welisara Navy base.

He said that 112 of them were at the camp while 68 others were on leave when they had been confirmed to have contracted the virus.