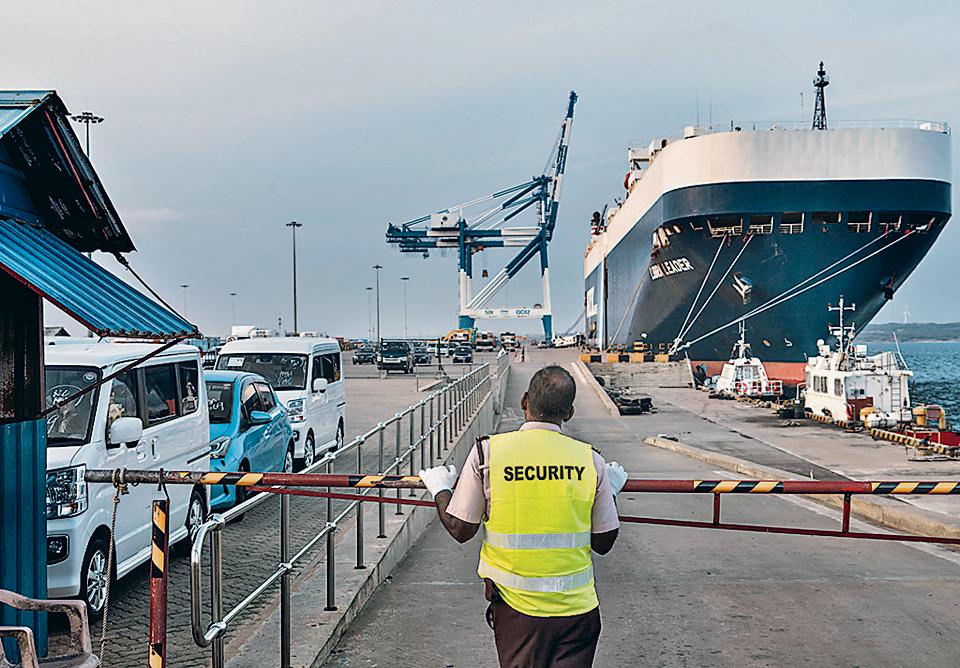 Corruption is a luxury cruiser sailing exclusively outside Europe and non-Anglo waters, it seems, somehow finding safe harbour only in our parts of the world.

The NYT allegations and selective facts are blatant: Their estimates of ship arrivals to Hambantota use 2012 data, rather than the over-10-times higher 2017/18 figures. Imputations of China funding the Rajapaksa campaign repackage a now-buried tale first published by Lanka’s State-owned Daily News in 2015. A key informant for the piece is a recently-appointed Editor-in-Chief of state-owned Sunday Observer. Another, is the disgraced former Finance Minister of the doomed Yahapalanaya project.

We need a historical and geopolitical clearing of the throat here. Let’s contextualise Hambantota’s erased history of suffering, the counter-hegemonic role played by China in the global economy, and Sri Lanka’s need for industrialisation.

A hasty history of Hambantota – Port of the Sampan

Colombo always misapprehends Hambantota. Take Leonard Woolf’s oft-celebrated Village in the Jungle, where a Colombo capitalist Casanova tries to seduce a local married woman, promising to make her husband a gambārayā. Yet Woolf dared not explain how this gambārayā post was created.

English wars post-1780s, their massacres of 1818 and 1848, and attendant regional land-grabs, bequeathed scattered and impoverished peasant settlements there by the late 19th century.

The English handed stolen Crown Land to colonial and local absentee landowners for paddy cultivation, who hired on-site managing agents (gambārayās) to exploit local peasants and migrant landless labourers. With moneylenders and merchants also preying on these tenants, who even resorted to hunger renting, capital gushed into parasitic Colombo, and further West.

The 1980 ban on eco-friendly hena cultivation diverted those lands to Western boondoggles, creating even greater impoverishment. Resistance was met with nationwide massacres of at least 60,000 people in the late-1980s, with Hambantota bearing the brunt. This wrought neither cough nor hiccup from the ‘international community’.

Origins of the Magampura Port Project

A UNP Government once declared: “…The construction of a seaport at Hambantota is a project of ‘high priority’ aimed to strengthen … maritime industry and help Sri Lanka regain its historical position as a maritime hub in South Asia… A seaport at Hambantota would improve the economic situation of the southern region, viewed as Sri Lanka’s poorest region and stimulate the industrial development of the region. The proposed port is viewed as a hub on the Europe-Middle East and Far East shipping corridor and a gateway to the India-Pakistan-Bangladesh sub-continent.”

In 2003, a SLPA-linked ministerial taskforce reviewed the Lavalin study, declaring it “not bankable”, and “not a full feasibility study”. The taskforce report noted the Grand Master Plan objective to study the entire Hambantota terrain’s geophysical data was not achieved; while identifying factual errors.

Meanwhile, Sri Lanka’s Ministry of Ports Development and Development of the south, and the Ports Authority (SLPA), after a 2001 call for tenders, selected and paid Denmark’s consultancy firm Ramboll for a new Hamban-Port feasibility study.

With Western and Indian loans not forthcoming, China was invited to step in and construct the port following the Danish report’s specifications.

Oceanic ports do not bloom instantly, but require decades to develop hinterland and trade. Unlike Colombo’s congested port, Hambantota handles goods including large car carriers, requiring more worker hours. It’s good for southern workers – and would get even better if they make and load bikes, three-wheelers, cars, ships and machinery to be sold here and elsewhere.

Outside our own determination, who could help us enable such a transformation?

Assessing allies: China and the USA

Imperialist interference in Sri Lanka escalated after our 1948 transit from crown colony to crown dominion. In 1952 the US blocked aid after our Rubber-Rice Pact with China, which US adviser to ‘our’ Central Bank, Theodore Morgan, called a “Military-Political-Economic offensive against the Free World!”

Western-backed Big Pharma’s sabotage of Senaka Bibile’s progressive national pharmaceutical policy is well known. Less known is the US Embassy in Colombo’s threat of sanctions after the GoSL moved to ban genetically modified food in 2001.

A Carnegie Mellon University study analysing data from 117 elections worldwide, found US interference in at least four Sri Lankan elections (1956, twice in 1960 and 1965). In 1970 and 1977, US funds bankrolled the UNP. WikiLeaks revealed US Embassy “concern” about JVP “misappropriation” of financing for General Sarath Fonseka’s presidential bid. Former US Secretary of State John Kerry recently admitted to US spending $585 million to “promote democracy” in several countries including ours.

As for China, the 1952 Rubber-Rice Pact was signed by a US-allied, avowedly anti-communist UNP Government. It was Sri Lanka that approached China for loans as Western and Indian credit – hungry for short-term projects with quick returns – was not forthcoming. More recently, China agreed to help the hapless Yahapalana Government despite their election on a campaign of racist insults.Sri Lanka cannot afford to alienate sources of credit alternative to the predatory IMF and World Bank, whose structural adjustments exacerbate “the development of underdevelopment”. China’s economic rise offers a post-Western-hegemony new multipolar world, which serves Lanka’s interests if harnessed strategically.

“Debt-trap diplomacy” and “String of Pearls”

The loudest coughing cacophony on “China’s debt-trap diplomacy” comes from the Indian Center of Policy Research, funded by the Indian Government and such US funders as the Bill Gates, Hewletts, Omidyar, Ford, and Asia Foundations (all sellers of overpriced industrial goods and services).

The “String of Pearls” allegation that China is using civilian facilities to build a chain of Indian Ocean naval and military bases originates in a 2004 report to the US Department of Defence by Booz, Allen, Hamilton, a US military think-tank contractor – employer of whistleblower Edward Snowden, who accessed top-secret reports due to its lucrative Pentagon links.

Even a 2013 Economist article says, “China’s growing empire of ports abroad is mainly about trade, not aggression”, echoing Beijing’s insistence it does not seek hegemony. Nevertheless, the NYT repeats this “SoP” argument, while ignoring the scatterplot of US military bases around the world including our region.

This NYT article comes out when the Central Bank Bond fraud has undermined their allies’ claims to “good governance” (Yahapalanaya). US attempts at provoking a military confrontation in the South China Sea, since Obama’s “Pivot to Asia,” have been replaced by internationally condemned trade wars, with Trump firing the first salvos.

After April’s Modi and Xi summit, relations between India and China have improved. Beijing-based Global Times opines, the USA

“… hopes India can play an essential role in balancing the rise of China. Does India really want to play the role that the US expects? …this strategy has a strong military stance against China. At the very least, it is redividing Asia-Pacific with Cold War thinking … It is better for India to look to China for ways of self-development. What India can learn from China is that its ability to stand on its own feet will determine its place in Asia and the world.”

The message from Beijing, of self-reliant cooperation for mutual advancement, is surely more persuasive than Washington’s confrontationist superpower agenda beyond its expiry date. Self-reliance should also be our stance!

Hambantota offers an alternative to the dictatorship of Colombo’s mercantile elite, who believe village idiots don’t need modernised facilities that provide better jobs, and should stick to seasonal, low-productivity cultivation.

As an entrepot based on a productive hinterland, Hambantota could become a manufacturing base for modern industrialisation of a historically-marginalised region. It could provide a template for the development of Sri Lanka’s peripheries, allowing them to shake off the parasitic port of Colombo.

Yet export industrialisation is a short-term solution. A home market for locally produced goods is vital for sustainable development. Will our usurious banks and their import-happy merchants invest in it?

Leaving the NYT aside, can our media inspire a national conversation to develop the country in this way?

The real corruption is in the multinational corporate system of lobbying, kickbacks, insider-trading, pricing, tax avoidance, and capturing the country’s wealth wasted in imported conspicuous consumption by a Colombo cabal that has served the West faithfully for centuries.